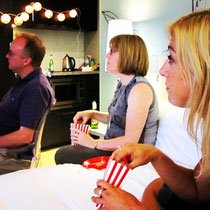 When I entered the 50 Kisses script competition, I hadn’t written anything for quite a while. I wasn’t even sure if I would again – but when I saw the competition mentioned on Twitter, something sparked. I looked up the details, and came up with “Nothing Ventured” – the story of a florist and the man who loves her. OK, it’s a naff title, but it was how I felt when I wrote it. I sent the script off, made a note of the date of the first cut, and got on with my life.

Then I made the first cut. The stakes got higher, and I realised I would actually be quite disappointed if the script didn’t go further. But I didn’t get much chance to think about it – the London Olympics were coming, and I was working on the Australian broadcast.

About a week into competition, just as the day’s events were kicking off, I learned I was chosen as one of the 50. I swore. I screamed. I cried. And I spent the rest of the day floating two feet above the ground. I didn’t care how stressful it got – how many events ran long or short, how many commercial breaks had to be looked after, and how many things happened at the same time. I don’t think I stopped smiling for at least 25 hours.

I can’t say enough about how much I learned from the rest of the process – and I think this would be common to everyone whose script was selected. I got notes, and did rewrites. Two of the production companies contacted me with questions and ideas. I watched their films online and saw my characters made flesh (and thank you to my sister for forcing me to do so!). I got more and more excited as the film neared completion – and found out that “Nothing Ventured” would be included as one of 25 in the final cut. I arranged a small screening in Melbourne for Valentine’s Day, where I would be working on another Olympics (Sochi). Food was ordered, friends and family invited, and I waited for the posters to arrive – something what was happening all over the world.

And then – the email. “Nothing Ventured” was on the cutting room floor. There was a technical issue with the finished submission.

Poor Maureen Hascoet. That can’t have been the easiest note to send – and to his credit, Chris Jones did send me a version with my script in so I could show it at my screening just a few days later.

On Valentine’s Day, six of us assembled in my hotel room to watch the “Writer’s Cut”. We laughed, cried, and squirmed. The film is a testament to the passion of everyone involved, from writers to production crews to composers, and the LSF crew who put it all together.

I’m immensely proud to have been a part of “50 Kisses”. But the fact remains that the version that the world is seeing no longer contains my work. Am I disappointed? Yes. Was I angry? Yes, but, frustratingly, without anyone to direct the anger at. It wasn’t Chris or Maureen’s fault, and it can’t have cheered the production crew up to get their email either.

So. What did I gain?

And the one thing I will never forget – that feeling. That glorious feeling that I didn’t suck after all. A feeling I’d like to have again. Not a bad return on a two-page script.