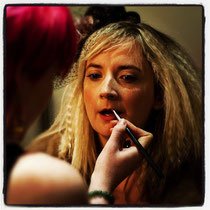 Maureen: For a filmmaker, I always find myself making up excuses not to make films. ‘I don’t have money’, ‘I have to work a full time job’, ‘I don’t have time’.

Excuses are easy when you’re on your own. Until life kicks in, and signs start to make your path obvious and will you into action. The competition is called 50 kisses – my first short film was called ‘The Little Kiss Shop’, which prompted different people to remark ‘You should make one!’ – and myself to think I should copyright the word ‘Kiss’.

The very premise of that competition takes the thorn out of the rose: the script is already written, you can just pick one! Then struck Serendipity. I found my producer – or rather my producer found me! Latvian 30 year old Anna, who has the sharp determination of a rottweiler under the ethereal looks of 18th century European aristocracy. We picked a script and gave it a modern current twist. For a 2 page script, our common effort was focused on packing as much information and background as possible in every detail that would be on screen. Everything had to be part of the story. And something had to set us apart from the competition.

Anna: Sometimes things just must happen!  And this is one of those cases –  Short film “Enough” was meant to happen!

This is how it started – I met a friend, I met Maureen!  Maureen is a very creative and talented filmmaker, but I am TV producer – both fighting through weekdays with our jobs to pay the bills, somehow for a while we had paused our real professions.

In girly meetings, between wine mixed with innocent gossip, we started to dream up our lives outside of the ”bills factory”.  And so we started to pitch our different ideas to each other!

Next thing you know, Maureen brought me a script from ”50 kisses”.  And the rest of the evening was spent discussing characters, building their stories and that’s when you know it’s too late – this script had to come alive.

Maureen: For me, 2 factors were determining: we’ll have a film if we can get 1) a good location, and 2) a recognizable actress.

Anna worked on the location – and boy! Did she deliver! I’d asked for a balcony or a terrace, somewhere elevated, with a nice night city scape for background – she brought me to a large balcony in a penthouse behind Charing Cross station full of exotic plants that could look like we were in Mexico! Better yet, the owner had already had them fitted with colored lights – red, orange and blue. The rest of the apartment is not featured and every corner presents a trait that would deserve its own short film, like a dinner scene at the solid black 14 seat dinner table with solid black chairs, and a solid black chandelier hanging above, or the building clock that is his window… Quite far from the fire escape the film was originally written to happen on.

Anna: Yeah, we were very blessed to meet the right people at the right time. What luck meeting Mr Hendrik! who after a short idea presentation, was willing to offer not only his terrace which we were looking for our filming location, but the whole of the second floor of his amazing artistic flat in Central London. And thanks to Maureen, we were honored to work with our experienced and professional actor trio – Simeon Willis, Brona Titley and Natalia Tena, known for her parts in ”Harry Potter and Deathly  Hallows” and ”About a Boy”. Of course, we would not be able to make our project alive without our crew who was professional with high responsible attitude to the job and good sense of humour as well.  And we would never be able to see what we had done in photos without talented photographer from Brazil Juliana Vasquez who came on board at the last minute!

Maureen: I had come across Natalia Tena about 4 years ago when I started my job, and had been so impressed by her energy and approachability that I’d been stalking her ever since. After finding any semi-professional pretext to email her every once in a while to remind her of my existence, I had the pleasure of realizing my email address had somehow made its way on her band’s mailing list. After a couple of failed opportunities of working together, I thought, why not try again for 50 Kisses. I was completely expecting another failure, on accounts of her busy schedule filming ‘Games of Throne’, but what followed was a series of good humored emails, punctuated by encouragements and eventually amazing news: she was coming back from Belfast for the shoot! I never really believed it until I buzzed the door of the penthouse open to let her in.

It felt like a professional shoot, and yes, a few bits and bobs went wrong, as you can expect on every film shoot, but in the end, we’re so proud that it happened. And it will happen again. No excuses.

Anna: This project is not only the challenge to take part in film competition “’50 Kisses’’ , but for such a short film, has proved to be such a great collective adventure!

A&M: Thank you 50 Kisses! And watch this space! 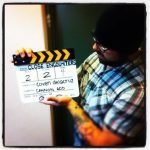 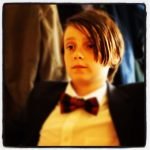