50 Kisses has all been about “Taking Chances” 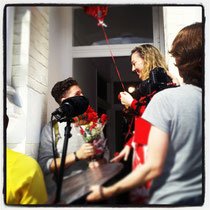 The making of 50 Kisses has been a long road.We’ve learned a lot as we have travelled from script competition, to film competition to post production. One of the things we have been pleasantly surprised by is the amount of engagement and affection for the project that even those who didn’t make it into the last 50 scripts have.Take Elena Dapelo for example. Elena’s script “Taking Chances” made the last 100 but didn’t get into the top 50 but it spurred her on to make the film herself. Brilliant.

Taking Chances: My Creative Journey From Acting And Writing To Directing

I think it’s quite appropriate that the first project I ever attempted as a director/producer was called Taking Chances. I am a trained actress and writer who developed an appetite for directing but hesitate to take the plunge. Not making into the final 50 was a sort of a blessing in disguise. It gave me the extra motivational push I needed to make my own short. At the same time, being shortlisted into the final 100 increased my confidence in my writing skills and added credibility to the project.

As a writer/performer, I was keen on acting as well as directing but would also have to contend with the extra challenge of taking care of most of the producing duties. My budget was very limited, and I had a lot on the plate for a newcomer. It was important to keep it simple: a two-hander script, two pages, one location. It was the perfect way to taste the water.

A lesson I have learned from 50 kisses is to be more pro-active in putting my work out there. It’s amazing the response you can get. Once I set on a date for the shooting, everything fell into place really quickly. Crew and location were sorted out first. I contacted a few people I was keen to get involved and they came on board as soon as told them about the project. All I needed was an actor for the male lead role.

I embraced the casting process reluctantly, not knowing what to expect. When the script and the casting breakdown started to circulate the response was again great – and I was spoilt for choice! I was absolutely blessed in finding Tim- his experience and knowledge brought a lot of added value to the project -but I also got to meet some very talented actors I hope I’ll have a chance to work with in the future.

The short was shot in a day- a Saturday in late September. We were incredibly lucky with the weather: most of the shots were exteriors and it turned out later on that I picked the last day of summer. My plan was to go for an early start to make the most of the daylight and allow for plenty of extra time in building up my schedule- taking into account my doubling up as director and lead actress. I set up for catering the day before and delegated the on-set production duties as much as I could. And extra time was crucial:  all that could go wrong did- noisy neighbourhood, a big van parking just in front of the location casting a huge shadow, essential props breaking- despite being tested in advance!  Throwing acting –and producing- into the mix more than doubled up the pressure but it also doubled up the satisfaction when it all worked out in the end.

Having to switch my creative prospective from writer, to actress, to producer and director allowed me to see my writing with a different eye. For me it meant venturing in territories that were rather unfamiliar to rediscover the storytelling process from yet another point of view.

It definitely made an otherwise small scale project quite challenging, but at the same time all the more rewarding. So much that it prompted me to raise the stakes and do it again, this time with a ten pages short, which is now in post-production.

Making a Near Kiss has definitely been a massive learning experience I will treasure. I am very happy to be given the chance to share the final result with all the people that were involved in the 50 kisses project. I hope they will enjoy watching it as much as I enjoyed making it! 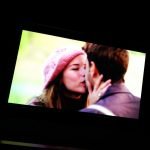