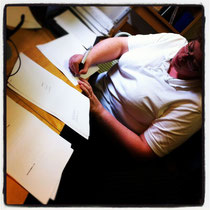 It would be this morning that the central line decides to crash and burn as I travel to Ealing Studios early to announce the 50 Kisses winners.Flipping Olympics, don’t they know we have 50 Kisses to announce? I clawed my way through the crowds of infuriating tourists and untrained G4S staff to get to Stratford, got on the Jubilee line and made it as far as Canary Wharf before I thought it best that I just find a place with strong Wifi and stronger coffee to start announcing.

It’s been a fun, exhausting and exhilarating couple of weeks. I thought I’d note my thoughts on the process because, as a writer, I took some massive learnings and it may be that you can too.

1. Many Great Scripts – All Very Similar – Our readers identified some fantastic scripts, all cracking in their own right BUT…there were a lot that were very similar in story. So when we came to look at the scripts that had bubbled to the surface, we kept reading similar scripts.

Examples that spring to mind were – huge number of hospital death/last kiss scripts, kidnap or hostage situations, Suicides stopped by love, the progression of a relationship through the years, flashing forward to see a whole relationship and even though it was doomed doing it anyway and one partner dead but you don’t know it.

It was weird to see so many of a similar ilk. Even though they were well written we couldn’t have the same story play out in 50 different ways. So some great writing had to be put to the side because we felt we’d seen it before.

As a writer, it made me think very much about how I need to push my brainstorming a little further. The scripts that got through were the ones that took the story in a direction you didn’t think was possible. There was nothing wrong with the scripts that didn’t get through, but it was just that the ones that stood out were very different.

2. Unrealistic or too difficult to make – Again, we had some awesome stand out scripts that simply either has too many locations, a cast of thousands, were set in period, were animations or had another flag that would mean it would be unlikely a filmmaker would choose to make it.

At the end of the day we want our filmmakers to make 50 Kisses, not 49. We couldn’t include scripts that had a full theater audience or were set in a packed cinema, as it would just be unlikely to be made.

As a writer, I take this a challenge to set my story in a realistic, make able world until I’m working with Chris Nolan of course and then I’m pulling that fab location on the space station out my head!

3. Too clever or quirky – We loved some of quirky, clever scripts that came through but again, we couldn’t include too many. We intend 50 Kisses to be a feature film, having too many scripts that set up and then pay off a gag or set up and then twist, would, we felt, mean that the audience would start to look for the gag or the twist…we needed therefore to have some more reflective pieces in the 50 too.

Think about the overall piece – two minute, twist. two minute gag, two minute twist….it would end up looking like a series of adverts. So again, some scripts that would work perfectly well individually might not have made it through because of the overall flow of the film.

3.1 On the Flipside – too obvious – just to completely contradict myself, one of the other things I noticed was the scripts I put down quickly were the ones that within the first two/three lines you could tell what was going to happen. No surprises, no challenges, just obvious.

4. What we have is the first draft of our feature film – All of the writers will get some development notes and, we hope, a phone call from us to discuss them. Some of the scripts are damn near there, others are a beat or two away from being ready.What is clear is that it is an ongoing process.

5. Building Community – In  the past couple of months we have built a community around 50 Kisses, it is one we intend to keep building. We have a few other projects on the back burner that we want to bring to the community at a later date and have been overwhelmed at the generous and collaborative nature of the majority of 50kissers! Yay us! This is your community and your project as much as it is ours – use it and engage with it to further a) your own writing b) your list of credits c) your career…we ARE all in this together and can’t wait to bring this social film-making and scripting experiment to cinemas next year.

6. Don’t Give Up – I’ve been monitoring the chat around 50 Kisses and there are a lot of writers despairing that their script didn’t get through. Please don’t despair. Not getting onto the long list or short list, or not making it through to the final 50 kisses doesn’t mean you are a bad writer…it simply means you didn’t get through. That’s it. In this business, you are going to hear No way, WAY more than you hear yes. How you handle that no at this stage is going to determine how well you are going to handle the bigger noes. Submitting a script to a competition to the first time takes guts. I’ve been there, you live and breathe it and invest far too much emotional energy in the outcome – I’m not going to be able to stop people feeling bad and perhaps saying, we’ve all been there, won’t help either…but we have. Don’t give up.

Congrats to the writers to got into the top 50. Commiserations to those who didn’t. 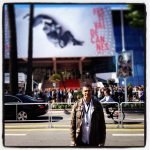 A Kiss In Cannes by Kulvinder Gill