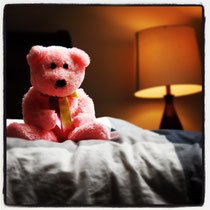 “What was I thinking?”

“Why did I think we could pull this off?”


“I wonder if they’ll have bagels on set tomorrow morning?

All these things were rattling through my head going into the 14th hour of the 2-day shoot.

I was so exhausted from the previous 48 hours that I let these thoughts enter my mind, even as we were getting close to wrapping up at 2am on a cold and rainy Sunday night, just a few hours before we all had to be back at our regular jobs. We’d been battling the rain and wind all weekend, filming mostly outside. Everyone was soaked and tired and ready to pack it in. But we couldn’t give up. Not when we were so close to finishing the last film. Yes, you read that right… We’re insane, because we didn’t just shoot one 50 kisses film, we shot four of them!

I randomly read about the 50 Kisses competition off a Facebook post of some friend well into the start of the competition. It was already late September, we’d missed the screenwriting portion of the program by a few months, and were weeks behind on getting a filming project started. We were also busy shooting the last few episodes of the TV series I work on, and doing a short film right then and there was the furthest things from my mind at that point. But at the same time, I’ve been working for a while now and hadn’t been behind the camera in any creative capacity about 3 years, and I felt it was really time to get moving again. Let’s be honest, working in industry can be draining simply from the amount of hours you must work, and the last thing you want to do is give up your weekend – your only rest from a long week on set – to shoot another project. But this film would be all ours, how could you pass up the opportunity?

I emailed the link for the 50K website to a few friends in the office, asking if they would be interested in doing a project together. We could each direct one, and help produce the other 3. We all entered the contest separately, each choosing his own script to direct. We selected “Don’t”, “Priceless”, “Unbearable”, and “First/Last”. I personally chose to do “Unbearable”, because I thought it would be a fantastic exercise to test our ability to tell a story with inanimate objects. These teddy bears must be brought to life as characters, but only through the use of camera movements, framing, sound, and at times the influence of a human background element. The other guys had their own reasons for selecting their films, but it gave us a fun range of comedic and dramatic type stories so that every shoot would be a little bit different.

Trying to organize the shooting of four films, with crew all in revolving roles for each other, was a monumental task. Especially so, given that we only had two weeks for prep, including casting 12 actors to cover the four films, leaving one weekend for shooting, and only 12 days for post (all the while while still spending 12 to 14 hours/day on set or in the office during the week for our real jobs!). Filming itself was a difficult exercise. Our DP owned a RED Scarlett with a small equipment package, and we shot B-camera coverage with a 7D, so we luckily didn’t have tons of equipment to lug around and we did got a ton of shots off. However as I mentioned, we had horrible rainy weather for most of the weekend, and having 3 out of the 4 films set outdoors did not help matters.

The most specific issue we dealt with, and in retrospect my largest regret, was artificially set upon us by ourselves. We allotted each film a 6-hour shooting schedule (giving us two 12-hour shooting days plus travel time in between). It’s already difficult enough to shoot a single film properly with varying call times to START the day, but trying to fit everything to END at a very specific time to move on to the next film is even harder. With no real ability to push calls due to any delays in filming, we were forced to just make it work. We set this 6-hour limit so everyone could get their chance at doing their own picture, but as prepared as we all were with shot lists, schematics, and story boards, we still all felt the pressure to finish on time. I would have loved to have had the luxury of an extra week or two to space out our shooting schedule, perhaps giving each film an entire day dedicated towards it. But with the submission deadline looming, we really couldn’t afford to wait.

So push forward we did, through the jam packed schedule. We managed to pull it off too, shooting through the weekend before returning to work this past Monday more tired than any of us had hoped we’d be! While it was a trying time, we had a fantastic team working with us: A great crew of 11, an even better cast, and volunteer family members who brought us fresh warm dinners on the nights we were suffering in down-pouring rain really helped make the weekend more manageable.

Even with the crushed time lines, for our group of four directors in particular, I believe it was important we get back out there behind the camera. Sometimes we all need that kick in the pants to get started on a new project, and that’s what 50 Kisses brought to us, that little reminder of why we got into this business in the first place. It wasn’t for the hours (nope!), nor the money (I sure hope not!), nor the time spent away from family and friends (no way!). It’s for the love of the medium and the chance to tell a story. As difficult as this past weekend was on us mentally and physically, I’m happy we did it. I’m happy we reminded ourselves that we can still create meaningful pieces of art and tell important stories. And I’m happy to have done it in conjunction with all the other teams out there making 50 Kisses films. It means that final feature length product will be an amalgamation of all the heart and strength of hundreds of film making teams all over the world, and what else could we all use more on Valentine’s Day than a little extra heart?

For now, it’s back to editing for me… Each director is cutting his own film, and we’ve got just about a week to finish post before we must submit. I’d also like to try to fit some sleep in there somewhere, but I may be forced to wait until after the submission deadline has passed for that long awaited nap. Ah well, I do it for the story. Can’t regret that. 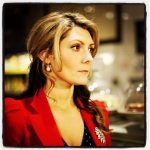 Close Encounters at 1.15am…