How I Learned To Love Again by Baz Hodson 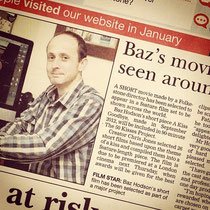 So, where are we at these days?! It’s 18 months down the line from the wrap on my short film ‘A Kiss Goodbye’ and we’re now on the final PR push for 50 Kisses, which after a long haul has got its BBFC 15 certification along with the wonderful DCP drive required for the projection of feature films in this modern age. It will premiere at Genesis Cinema, London E1 on 13 February. There you have it, a blatant plug! No apologies for any further ones that may arise further in this post.

If you spend most of your life in a creative environment you end up being your own worst critic and it was no different with the short film ‘A Kiss Goodbye’.  As a Director you have to be the driving force behind the project, bringing the cast and crew together with the same enthusiasm for each and every aspect in order to reach the desired outcome.  In any film production you are dealing with many subjective views and within the context of 50 Kisses, it was also with another 125 other film-makers, all making mixed genre short films set on Valentine’s Day with the central theme of a ‘Kiss’.

I’m not entirely sure when this critical eye starts a raging war in your head, or if it ever really ends but there’s definitely something in the editing of a film.  The long hours, the dark rooms, the same two people who really should be eating better meals and spending time with their family or anywhere other than sitting in an enclosed room revisiting endless footage over and over again.  Think Sigourney Weaver drifting in space on the Nostromo then you’ll appreciate that the edit suite is, truly, a place where no one can hear you scream.

Still, we’ve all survived the film-making process and the epic journey that is 50 Kisses. Chris Jones no doubt must have a tale or two he could tell and, is it possible if bribed or plied with enough alcohol, he may be willing to kiss and tell a few stories at the after party on the evening of 13 February?!  In the grand scheme it was truly a great platform for new talent to get involved and make films without limitation.

From ‘A Kiss Goodbye’ perspective it was fantastic news to hear we’d made the final cut for the feature film.  I cannot heap enough praise on the cast and crew who were all dedicated professionals throughout the one day production and the 50 Kisses premiere event will be a chance for their efforts to be recognised.  Some of the team have already carved a niche within their own discipline.  Actress Elizabeth Croft, (The Hustle, Casualty, Dr Who), has landed a leading role in the stage version of ‘Birdsong’, based on the Sebastian Faulks’ novel, and is shortly to begin a UK national tour.  Our production sound mixer, Nadine Richardson, has worked as a sound recordist on the dailies for the Ron Howard feature ‘Rush’.

Meanwhile, I have joined forces with a screen-writer, Marcus Bonner, to work on some features I’ve had kicking around for way too long. However, on New Year’s Eve he emailed an idea for the Reed Recruitment Short Film competition and, in two weeks, we managed to wrap up ‘A Family Affair’ to meet the deadline of 22 January.  It was close run thing and even involved a last minute search on Twitter of all places to find a sound recordist!

Film making is a challenge from pre-produciton to post production and when you’re at the helm for the long haul it’s very easy to lose sight of what you actually achieve.  Only given hindsight, time and further opportunities do we learn to evaluate.  To quote lyrics in the Foo Fighters song “it’s times like these you learn to love again”.

Baz Hodson
Under Your Hat Productions

p.s   Did I mention the red carpet premiere is on 13th February at 7pm at the Genesis Cinema, London E1?!!! 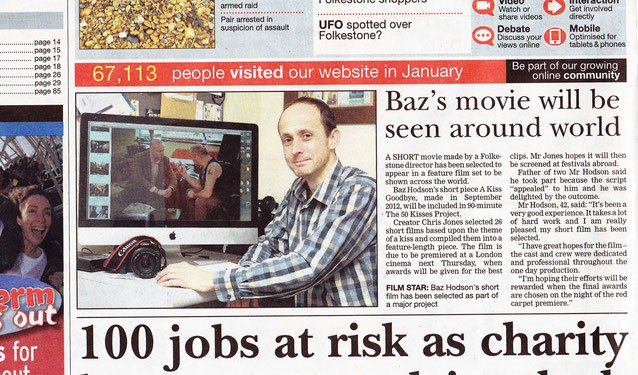