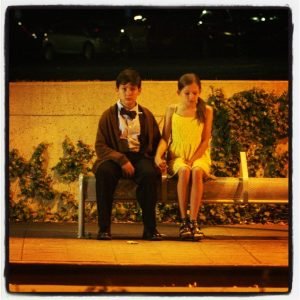 I heard about 50 kisses on Facebook. Write a short and get it in the cinema? Boom! Count me in. As soon as I read the challenge, my brain started fizzing with various scenarios. I read on… only one entry per person. What! My plan was going to be to hedge my bets with multiple entries in multiple genres.

But now I had to pick just one.

So then I came to the writing. I started with the idea of a first kiss and the thought that, more than just the kiss itself, there’s the build up to it, the anticipation, the excitement, the expectation and then the surprise where the reality was better than you’d expected. So I was thinking about all of the ways that one can practice. But just practicing doesn’t make a dynamic story, so I decided to cut the practices into an actual date where it built and built in excitement and ridiculousness, climaxing with a pop of the balloon, making you expect one outcome and hopefully giving you a sweet surprise when it goes the other way.

Oh and the other thought I had was that I wanted to do it, silent, or essentially silent. That was primarily just because I thought it would be a good exercise. I had a friend that went to film school and they were telling me people make the mistake of thinking that scripts are about talking, so in their first term they are set an assignment where they have to write without words. I thought I’d give it a go too! I’m pleased with it actually as it forces you to think in a visual way.

So then I came to the writing itself. I always write what I call a ‘vomit draft’ (I’m not sure where I picked that term up from, but I like the idea of just getting everything out as quick as possible). I sat for about half an hour or so and banged out two quick pages. Then I left it for a couple of weeks, just sitting there, and I let it mull over in the back of my mind. I made a few tweaks. Adding a word, taking it out, putting it back, you know how it goes! I was aware of the constraints for filmmakers to some degree and I toyed with whether to include the interior of the cinema or not, as I felt that this could put people off making it – and might count against me in the judging process! But in the end, I thought, hey ho, it’s pretty easy to cheat it if you shoot it really close or shoot on a mobile phone or whatever, so I might as well leave it in and see how people respond to it.

Once I was selected and I saw the other scripts, I realised that a huge proportion of the scripts were written from the guy’s point of view. Something that I myself did too. So on my second draft, I stated that I was happy for people to switch the genders of the protagonists around, or to make them gay, or do it however they fancied – the core thing for me was to create a universal little moment.

It’s a great way to watch shorts, so big hat off to Chris, Gail and the team for coming up with the idea! 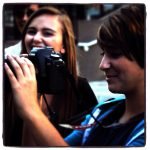 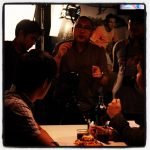 50 Kisses – One was mine! Guest Blog Post From Ross Aitken