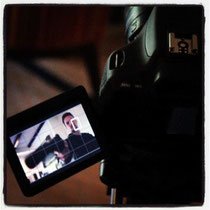 I was told about 50kisses by a fellow script writer Gareth Turpie (Who made it to the last 100 himself) and thought I’d give it a go. I hadn’t wrote a short in a while as I was mostly concentrating on my feature writing, but the competition seemed like an interesting one. The idea of writing something a little more romantic than my normal violence’s and horror style scripts was a draw, and so was the idea of the competition to put all 50 films together to create a feature.

I came up with the concept of ‘The Moment’ very quickly. It had been an idea that had been floating in my head for a while and this seemed the perfect project for it. I knew I wanted to write something that was dialogue based and set in a single location because of the filming side of the competition. So I made sure I wrote something that I felt I could film myself if I wanted. (which I haven’t in the end, filmed that is)

I wrote around three drafts of the script before I sent it off. Most of the drafts where focused on sharpening up the dialogue and interaction between the two leads. I wanted the script to have a type of ‘his girl friday’ interplay between the two characters and felt when I had achieved that kind of thing it was ready.

Everyone I pitched the idea to loved it. Instantly laughed and showed great enthusiasm for it. The last time I had that kind of response for a script I finished in the top six. I felt good about my chances especially as I thought about 500 people would enter giving good odds at 1/10.

When it was announced that over 1800 people had entered the competition it instantly felt bigger. Something I had entered for fun now had a real feel about it. I wanted to get through at least the first stage but my aim was still to go all the way.

When the first short list was announced I was happy to be through. I had just started on twitter and the buzz about the competition meant I was able to interact with a lot of new scriptwriters. Was a very good bonus as well as getting through.

When the list of the top 100 was released I didn’t think I had made it. I searched for ‘Moment’ which was what the script was put under the first time round and it wasn’t there. Much to my disappointment. Once I searched the rest of the list to see if Gareth was there I saw my name near the bottom under ‘The moment’. From this point I felt good about making the top 50 and did.

After reading all the fifty scripts that won I felt very pleased with my effort.

There was clearly a lot of great scripts in the competition and it felt nice to be apart of it. Validation for a lot of hard work. When the comments started coming in for my script I was delighted by the response.

At this stage I started thinking about the next draft. A lot of the feedback suggested changing the ending but I felt very strongly that I didn’t want it. Again one of the things that drew me to the competition was being able to write something a little lighter so the idea of a darker ending didn’t appeal. A lot of other suggestions I did take on board and wrote a second draft using the feedback from both other writers and Gail at 50kisses.

By this stage I had interacted with plenty of the writers and film makers on twitter and it seemed that a lot of people were interested in making my script. When the film making part started, 20% of the film makers where making ‘the moment’. One of the proudest moments (if not the proudest) I’ve had in my writing career.

Whats more, I was getting emails from producers who had read the 50kisses scripts and singled me out. The moment has lead to me writing a treatment for a feature film and a script for a pilot TV show that could both lead to paid work (especially the pilot as the trailer looks great). The attention the 2 minute script got had far out weighed the feature film I had sent to producers the year before. Was an odd feeling, but a very good one.

Over the last month I’ve had plenty of film makers contact me with takes on how they want to do my short and have found it to be a great process.

Everyone has such fresh and engaging ideas for the same script and I can’t wait to see the outcome. While some are still trying to kill of one of the characters they have all understood my reasons for the ending and worked with me to find a suitable solution. I truly can not wait to see them (especially now that there is almost 20 different versions being made).

Looking ahead I can’t wait to see the finished product of 50kisses. To see how each film compliments the last and what sort of overall narrative is created. It’s going to be an incredible view. 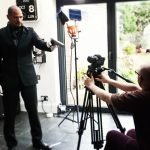