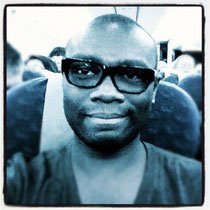 The backstory? I hear you ask. Well….I had recently completed a fifth draft of a feature script and was about to lean into working up another feature idea when I saw the 50 Kisses competition. Competitions are great! It’s masochistic but the whip hand of the deadline, it sadly gets things done! I saw the post two days before the deadline and after spreading the news to my writer buddies I went on a long lunchtime walk. I came back with a Nasi Goreng and a pretty fully formed idea.

These days If I get an idea for a short I go at it quite quickly which is a big change from my first short which took me over a year to write. It did win an award and taught me a lot about screenwriting, but that’s way too much time on fifteen pages!! With this I had two days to get the script in and that seemed the perfect amount of time. Armed with the idea, I tried to squeeze in a couple of reveals and as much atmosphere, emotion, intrigue into the two pages as I could!. Like all the best sci-fi, at it’s core is the question of what it is to be human. I do love smart, high concept but well grounded sci-fi, and writing ‘Neil’ was my attempt to deliver that kind of film in a snapshot.

Getting through to the final 50 out of over 1800 entrants was great news and I was pleasantly surprised at the irresponsibly high percentage of teams who chose to shoot ‘Neil’!! At one point it was the second most picked script with over ten per cent of teams signing on! So far so fun!!

Often feature projects have been loved and laboured over for some time and then often go through a potentially incredibly enriching or catastrophically destructive process of notes and rewrites. Luckily two pages is by comparison a walk in the park. The development process so far has been fun! It’s been interesting, it’s been a tiny bit challenging but in a positive sense. You know that there’s something in the script which speaks to the teams willing to put their time, money and favours on the line, so you know you all want the same thing! A great viewing experience. You also know some aspects of your brilliant story will tickle them more than others. Some interpretations will be close to your vision and some will not.

Coming from an extensive editing background I gave up being at all sure there was only one way to cut a scene a long time ago. The process of creative discovery has it’s own rhythm – accidents, crazy ideas, taking the time to play, they all have their right and proper place. One of the suggestions from the 50Kisses team I was interested in exploring but simply couldn’t explore within the two page limit without weakening the finely balanced earlier part of the script was adding another character to ask Rita the questions Luckily some of the teams have checked in with me saying they’re interested in doing so. Which I’m totally down with. So in way they’ve worked out a sneaky way of getting an extra half page of dialogue and action into the film. I actually still like the idea of it being a quiet moment for Rita as she contemplates how she feels without the imposition of another character in her emotional space, but I know that it could also work well the other way.

This is running a bit long so I’ll wrap up soon. Just a personal P.O.V on etiquette. It’s true that all writers despite wearing Kevlar battle armour are soft sensitive creatures inside. Like cute little crustaceans. Almost all of the teams I’ve touched base with have been great. They’ve had their own takes and I’ve expressed my views and said ultimately it’s up to them what they want to shoot. I’m so intrigued to see the full spectrum of interpretations. I really am. I did however have someone change the title, character name and the entire back story to my script. I’m not totally bent out of shape by it but it’s not good etiquette and a misstep in terms of collaborative working relationships. It’s a bad model for the future. I know because I’ve naively done a similar thing myself so I speak from experience. Thought I’d mention it because it’s the kind of thing that’s easy to do but not that easy to un-do.

There’s still a month or so to go. It’s weird and thrilling to think there are all these teams out there, all over the world beavering away shooting, editing, mixing sound for an idea that popped into my head not that long ago on the way to lunch. Particularly as several of them are in the U.K, where I’m from. I wish I could drop in to each and every edit suite and have a look but that would spoil the surprise. It’s like waiting for Christmas morning Which is great! But also sucks!! I was going to shoot a version myself but it’s not going to be possible. So far I’ve directed most of my scripts myself but my previous short script ‘Love Hurts’ which just won an Australian Writers Guild Award here in Oz I won’t be directing. And ‘In The Blood’ a feature I’m about to go into further 6th draft script development on, it’s conceivable I may not direct either. In the past I’ve also been lucky enough to be entrusted with someone else’s script to direct, so I’m getting a rounded view of the whole thing. All the angles.

I can’t express how impressed I am with the 50 Kisses team, the volunteers, the vision, the execution, the website! It’s a big, big idea and it’s been brought to life with a big, big vision. 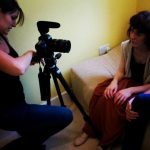